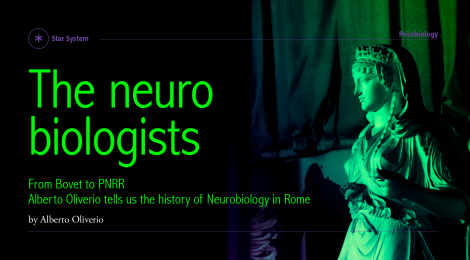 From Bovet to PNRR: Alberto Oliverio tells us the history of Neurobiology in Rome

If you enter La Sapienza from Viale Regina Margherita and proceed for a few steps, you will find, on the right, a wide staircase that leads to the former building of the General Physiology (today building CU026). There is a showcase at the entrance hall, among strange scientific devices of the seventies, books and documents, where Daniel Bovet’s photo stands. The name does not say much to the youngest (students and teachers who are). However, Bovet was born in Switzerland, lived in France, and has gained the Italian citizen since the end of the Second World War. Bovet won the Nobel prize in 1957. He worked for a long time in Italy and taught psychobiology at La Sapienza from the early seventies until the eighties. The Department of Biology and Biotechnology Charles Darwin has dedicated him an installation. That recalls that a few meters in the amphitheatre classroom with steep stairs, Bovet taught a subject, psychobiology, which until then had only been taught at the University of California at Irvine by his former student, James L. McGaugh. Bovet was very proud to have introduced in Italy, dominated by a solid dualist tradition that separated the body from the mind, a monistic subject of study. Provocatively, he loved to quote a phrase by Aldous Huxley, according which “the brain secretes thought like the liver secretes bile”.

Bovet was a true European citizen ante litteram. As a young man, he had worked in Switzerland, then in France, in Paris, in the famous Pasteur Institute in the laboratory of therapeutic chemistry. Finally, in Rome, at the Istituto Superiore di Sanità where, in 1947, the former director, Domenico Marotta, called him to head a large laboratory, the “Therapeutic Chemistry”. He collaborated with different researchers, biologists, chemists, and neurophysiologists, including his wife, Filomena Bovet Nitti. Bovet met his future wife in France during the fascism in the wake of his father, the statesman Francesco Saverio Nitti. As a freshly graduated medical doctor, I met Bovet in 1963 at the Istituto Superiore di Sanità; I was very excited by the kindness and understanding with which he listened to me. Once, he asked me, in an Italian which was not so easy to understand, given his Italian-French way of speaking, if I would have preferred to work in the field of the nervous system or in another one of which I did not even understand the spelling. I opted for the first, and I always wondered what my scientific career would have been if I had opted for the second, not intelligible proposal. Let’s also say that it so happened that it pushed me towards psychobiology, the one that Bovet, as a good cousin of Jacques Monod, often took to the field: in his scientific autobiography, “Vittoria sui Microbi” (Bollati 1991), claims to have always had a great fortune, perhaps also linked to his unconventional and creative way of proceeding. At the end of an experiment, Bovet suggested switching to the “Coca-Cola effect”, that is, to try to ascertain the effect – potentially unpredictable – of some active substance on the nervous system to see what happened…

The scientific results obtained by Bovet were linked not so much to a “Coca-Cola” effect, indicative of his playful and not serious attitude but definitively to his rigorous scientific methods. His scientific approach had let him clarify the mechanism of action of sulfonamides, antihistamines and synthetic curare. Synthetic curare simulated the effect of arrows soaked in curare by the Indians of the Amazon and is nowadays used in surgery to obtain muscle relaxation in anaesthesia. The transition to psychobiology occurred through the study of sympatholytics – which inhibit adrenergic transmission – and other active substances in the peripheral and central nervous systems. In 1964, after the judicial controversy that led to a crisis of the Istituto Superiore di Sanità, he moved to Sassari, where he taught pharmacology at the University. Finally, in Rome, he directed the laboratory of Psychobiology and Psychopharmacology of CNR and taught psychobiology at La Sapienza from 1971 for almost a decade. What was admirable in Bovet was his capacity for resilience, to adapt to different situations. In 1964, a possible call as a pharmacologist in Rome did not go through due to academic rivalry. He then chose Sassari and devoted himself to a massive research program to which American funding contributed. When he was called to Rome by the Faculty of Sciences, he dedicated himself to the new teaching, psychobiology, organizing the subject from the didactic point of view. He devoted himself with great enthusiasm to the training of the Bachelor of Science in Biological Sciences students. I recall, for example, contacts with Edoardo Amaldi, who proposed studying the effect of magnetic fields on brain function. Bovet’s presence in the Faculty of Sciences helped to catalyze the interests of physiologists and pharmacologists in what is now called neuroscience. There was a total permeability between the research group active at the CNR laboratory and the University. The students’ exercises benefited from the equipment and skills of the young researchers involved in the laboratory.

One of the main aspects of the research group in psychobiology was the demonstration that some behaviours had important biological components: behaviour depends on specific differences in the nervous system at the level of the neurobiological structures, from nerve receptors to specific cerebral nerve nuclei characteristics. These differences can occur in their extreme, almost paradoxical aspects, in those strains of animals that are the result of repeated selections or crosses: but precisely because of their extreme character, they refer to the diversity of mechanisms through which the individual, or if we want the individual brain, operates, solves problems, remembers, forgets. When I took over from Bovet in 1978 as a professor of psychobiology at the same Faculty of Sciences, I felt the weight of such an important scientific legacy. However, the legacy was standing in several young students, researchers, and colleagues, in Sapienza, as in other universities. They continued his work in the genetics of behaviour, memory, stress, and the relationships between motivating nerve mediators and strengthening mechanisms. Stefano Puglisi Allegra worked in neurobiology and the role of genes in psychiatric syndromes within the former Faculty of Psychology. Simona Cabib, also in the Faculty of Psychology, is dedicated to developmental psychobiology. Now professor of psychobiology in the Faculty of Sciences, Andrea Mele works on the molecular circuits and mechanisms at the base of memory and learning. Aldo Badiani, now in the Department of Physiology and Pharmacology, has dedicated himself to studying the mechanisms of addiction. In the Faculty of Psychology, Paolo Renzi has developed techniques for studying behaviour in objective conditions, an aspect Bovet himself cared about. Many other former students now work in different foreign universities. While it is a sign of the necessary mobility in scientific careers, it also underlines the difficulty of including young people in Italian research and avoiding losing skills gained by a long training period.

Nowadays, psychobiology is part of the Bachelor of Science in Biological Sciences and the Master of Science in Neurobiology. The Master degree was set in 2004 thanks to the didactic and scientific collaboration of colleagues who belonged to different Departments such as Human Anatomy, Cellular Biology of Development, Human Physiology and Pharmacology, Genetics, and Molecular Biology, and Biology. The success resides in the empirical approach and the active presence of students in the laboratories of La Sapienza and other institutions such as the Istituto Superiore di Sanità, the CNR, the Fondazione Santa Lucia, the IIT, the Embl, the Ebri on Rome territory, but also in foreign institutions such as, for example, the Karolinska in Stockholm, the Neuro-centre Magendie in Bordeaux or the University of Aix-Marseille. The enlargement of neurosciences in Sapienza and especially its integration also depends on the foundation of the Crin (Interdepartmental Research Center in Neurobiology).

Since 2007, the centenary of the birth of Bovet and the year of the inaugural congress of the Centre, fifteen years have been passed. The directors that took over, last among them Davide Ragozzino, have strengthened collaborations between researchers and training activities for students of the master’s degree and related fields. It is difficult to summarize in a few words the science carried out by researchers belonging to the seven different departments of Sapienza, who work within the Crin and who collect the scientific legacy not only of Bovet but of many neuroscientists – including Vittorio Erspamer – who worked at Sapienza. Ideally, this networking work has anticipated the philosophy of integrated network research that inspires the National Recovery and Resilience Plan (PNRR). This is even more important given the emphasis on neuroscience and neuropharmacology as themes of national interest. Therefore, the interactions between the many researchers and teachers who today belong to the field of Sapienza to the psycho- and neuro-biological areas are multiple. Outside the “academic” scene, I would like to refer to the playful spirit, but also indicative of his passion for research, with which Bovet dedicated a photo to me in which, referring to the studies on the genetic differences in the brain in mice, he wrote: “Perhaps nothing is worth/ How much the pleasure of a discovery/ As small as a mouse/ As big as the world/ As big as intelligence/ Made together”. “Made together” refers to the collective dimension of research and the relationship between teachers and students.

Alberto Oliverio, Psychobiologist at the Department of Biology and Biotechnology “Charles Darwin” Sapienza University of Rome